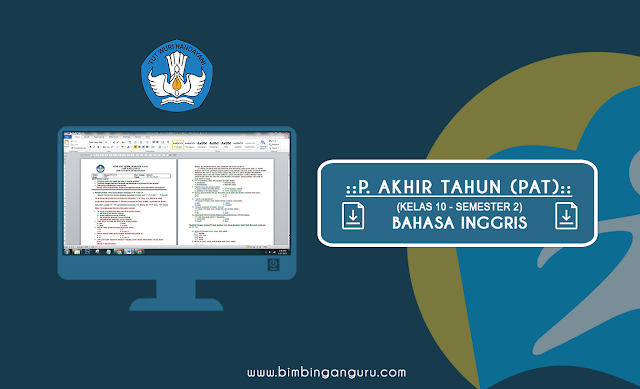 Selamat mengerjakan..
Text for questions 1-3
Meeting My Idol
One Sunday morning, I was walking along Jalan Kencana, looking for a novel at bookstore. A woman wearing sunglasses stopped me and asked me the way to the nearest hotel. I knew the place and leaded in the same direction. She thanked me and asked me where I would go. I said that I would go to a bookstore, a block after the hotel.
She was beautiful, friendly and looked so familiar. I tried to remember who she was. I thought she may be an actress or a singer. While I was trying to remember who she was, she asked me politely what I would buy at the bookstore. I said that I would buy a novel, Perahu Kertas , since the novelist was my idol. She said that she liked the novel too. Along the way to the hotel, we were so enthusiastic talking about it.
Finally, we arrived at the hotel. She thanked me and took a book out from her bag. She signed it and gave it to me. I was so surprised when received the novel I wished for ; Perahu Kertas with her autograph in it. I realized that she was Dewi Lestari, the writer of Perahu Kertas.

1. What did the woman give to the writer?
a. Her sunglasses
b. A newspaper
c. Her autograph
d. A magazine
e. A novel with her autograph

3. From the text we can conclude that……………………….
a. the writer realized that the woman was her idol from beginning.
b. the writer asked for her idol’s autograph.
c. the writer wanted to meet her idol at a hotel.
d. the writer would like to buy a novel.
e. The woman knew the way to the hotel.

Text for questions 4-8
Dear diary,
This morning my mother asked me to go shopping at a market. She was going to cook special chicken soup, which I liked very much. There were four items which I had to buy : carrots, chicken meat, tomatoes and eggs.
The market was quite far from my house, about fifteen minutes on foot. Before leaving, my mother advised me, “Please check everything before you go. A shopping bag for the items and money.” I said yes, but I felt reluctant to check my bag. I was quite sure that I had put them all in my bag. I was very happy to go. Arriving at the market, I first looked for the chicken meat. When I was going to pay, I found that I didn’t have money in my bag! My face paled and I walked home. I felt very tired when arrived home. My mother asked why I returned home and brought nothing. I told her what had happened and she blamed me for not listening to her advice. I understood if my mother acted that way. It was purely my fault so I apologized to her. My mother forgave me and asked me to be more careful and responsible. What happened today has taught me an important lesson. I promise to myself that I will never make a similar mistake.

6. What did the writer’s mother say to him/her after the incident?
a. To cook another dish.
b. To return to the market.
c. To be more careful and responsible.
d. To make a list of things to buy.
e. To buy food from the nearest food stall.

8. “I said yes, but I felt reluctant to check my bag.” (Paragraph 2)
What is the similar meaning of ‘reluctant’?
a. Certain.
b. Doubtful.
c. Important.
d. Unwilling.
e. Hesitant.

Text for questions 9-13
Bacharuddin Jusuf Habibie was born on June 25, 1936. He was the Third President of the Republic of Indonesia, from 1998 until 1999. He was born in parepare, South Sulawesi to Alwi Abdul Jalil Habibie and R.A. Tuti Marini Puspowardojo. His father was an agriculturist from Gorontalo of Bugis descent and his mother was a Javanese noblewoman from Yogyakarta. Habibie continued his studies in Jakarta. In 1955, he moved to Germany. He received a degree in engineering in Germany, giving him the tittle Diplom-Ingenieur in 1960.
In 1962, Habibie returned to Indonesia for three months on sick leave. During this time, he was reacquainted with Hasri Ainun, the daughter of R. Mohamad Besari. The two married on May 12, 1962 and returned to Germany shortly afterwards. They settled in Aachen for a short time before moving to Oberforstbach. In May 1963 their first son, Ilham Akbar Habibie, was born and later another son, Thareq Kemal Habibie.

12. “They settled in Aachen for a short time before moving to Oberforstbach.”
The word ‘they’ refers to _______.
a. Alwi Abdul Jalil Habibie and R.A. Tuti Marini Puspowardojo
b. Habibie and Hasri Ainun
c. Hasri Ainun and her father, R. Mohamad Besari
d. Habibie and his parents
e. Ilham Akbar Habibie and Thareq Kemal Habibie

Text for questions 14-15
Raden Ajeng Kartini was born to a noble family on April 21, 1879, in the village of Mayong, Jepara, Central Java. Kartini’s mother, Ngasirah, was the daughter of a religious scholar. Her father, Sosroningrat, was a Javanese aristocrat working for the Dutch colonial government. This afforded Kartini the opportunity to attend a Dutch school, at the age of 6. The school opened her eyes to Western ideals. During this time, Kartini also had sewing lessons from another regent’s wife, Mrs. Marie Ovink-Soer. Ovink-Soer imparted her feminist views to Kartini and was therefore instrumental in planting the seed for Kartini’s later activism. When Kartini reached adolescence, Javanese tradition dictated that she left her Dutch school for the sheltered existence deemed appropriate to a young female noble.
In 1903, she opened the first Indonesian primary school for native girls that did not discriminate based on social standing. She corresponded with Dutch colonial officials to further the cause of Javanese women’s emancipation up until her death, on September 17, 1904, in Rembang Regency, Central Java. In 1911, her letters were published.

14. How did Kartini get the opportunity to go to a Dutch school?
a. Her mother was the daughter of a religious scholar.
b. Her father worked for the Dutch colonial government.
c. She received sewing lessons from Mrs. Marie Ovink-Soer.
d. Her father was a Javanese aristroctat.
e. Ovink-Soer imparted her feminist views to Kartini.

15. What did Kartini do in 1903?
a. She published her letters.
b. She opened the first primary school for native girls.
c. She reached adolescence.
d. She left her Dutch school.
e. She dictated Javanese tradition.

Text for questions 16-19
Ki Hajar Dewantara was born in Yogyakarta, on May 2, 1889. His real name was Raden Mas Soewardi Soerjaningrat. As a part of an aristocratic family, Soewardi was free to enjoy his education. His recognition in the world of education was extraordinary. He always thought that education was one of the most important factors in freeing Indonesian people of their sufferings from colonization. He never considered his aristocracy important, instead he discarded his aristocracy and and changed his name to Ki Hajar Dewantara. He did that because he wanted to bring himself closer to people.

16. Ki Hajar Dewantara was honored as “Bapak Pendidikan Indonesia” because of his ideas in the world of education. His opinions were modern although he lived in colonial times. He always thought that everybody had the right to education. He was also chosen as Minister of Indonesian Education under President Soekarno’s administration. His birthday is celebrated as National Education Day (Hari Pendidikan Nasional). 16. What did Ki Hajar Dewantara do to bring himself closer to people?
a. He enjoyed his education.
b. He discarded his aristocracy.
c. He got appreciation
d. He was chosen as Minister.
e. He didn’t change his real name.

18. He was honored as “Bapak Pendidikan Indonesia” because of ___________.
a. His ideas in the world of education.
b. His aristocratic family background.
c. The change of his name.
d. His decision to take off his aristocracy.
e. His ways to be closer to people.

19. When was He chosen as Minister of Education?
a. During colonial times.
b. When he recognized the education.
c. After he got closer to people.
d. Under President Soekarno’s admiration.
e. Before he got appreciation.

Once there was a wise king who had two sons. He appointed eminent scholars to teach them all the arts. After a few years, the king became seriously ill. So, he decided to select the next king for his kingdom. He wanted to test his sons’ abilities. He called both of them and gave a room to each of them. He said, “You must fill this room completely with anything you wish. It can be anything, but there should be no space left behind and you should not seek advice from anyone.”
The next day the king visited the elder son’s room. The room was completely filled with hay. Then, he went to the younger son’s room, but it was kept closed. The king knocked at the door. The second son asked his father to enter and closed the door again. There was darkness everywhere and the king shouted at his second so angrily. Then, the second son lit a lamp and said, “I have filled this room with light!”
Now the king felt very happy and hugged his son proudly. He understood that the younger son would be the right person to rule the kingdom after him.

20. What did the king want to test his sons’ abilities for?
a. Teaching them all the arts.
b. Being seriously ill.
c. Seeking the advice.
d. Filling the room completely.
e. Selecting the next king for his kingdom.
Demikianlah Soal PAT Bahasa Inggris Kelas X K13 Tahun 2022/2023, Terbaru yang kami bagikan. Terima kasih atas kunjungannya.